It’s 1968, an NBC TV special. There’s a small stage, surrounded by primly-dressed women with big bouffant dos and men dressed as though they might be accountants. On the stage is a raven-maned man who occasionally sits on the steps to be among the people. But he is clearly not of the people – not least because he is in head to toe black leather. He’s the embodiment of rock’n’roll. He is, of course, Elvis Presley.

It’s not a look that would be easily pulled off unless one was a rock’n’roll legend, or perhaps a TT Race rider. But for Elvis it marks not just his famed comeback but the pivotal point in his wardrobe. Thereafter, through the 1970s, he would lapse, along with his fried peanut butter sarnie waistline, into pure stagewear: the rhinestones, the flares, the capes and those Bill Belew-designed, high-collared white jumpsuits (perfect for those black belt karate moves), like some hip-swiveling anti-Dracula. This, unfairly, tarnished Elvis’ reputation as a style icon.

Even Elvis wasn’t such a fan of it. That legendary, $10,000 gold lame suit of a decade earlier, which Colonel Parker commissioned for Presley from the rodeo tailor Nudie Cohn – the very man who made Johnny Cash the ‘Man in Black’? He didn’t much like that either – he’d often swap the trousers out for something plain and black. In the end he only wore the full suit three times. When it was suggested a new version be created for his ’68 comeback, Presley declined. “I have to be honest with you,” Presley said to Belew. “I always hated that suit.”

Presley’s earlier wardrobe, throughout most of 1950s, was much more him, and ironically, much more now. Think of Elvis today and you might first imagine ‘showtime’ Elvis – all exaggerated hair and jumpsuited up – but it’s his earlier dress sense that marks him out as a true style icon. And it feels particularly relevant today – Cuban collar shirts, wide-legged, pleated trousers, blousons – these are all garments making the rounds on the menswear circuit, but they were also integral to Elvis’ 1950s style wardrobe. He did it all first. On stage, he said, generally he’d wear clothes “as flashy as you can get them”. “[But] in public,” he added, “I like real conservative clothes, something that’s not too flashy”. Indeed, in many respects Presley wore the clothes of his era. As a young man he’d shop at Lansky Bros in Memphis – to which he was a loyal customer all his life – where he learned to pop up his collar and where he bought high-waisted pegged trousers, two tone shoes or simple black loafers, short sleeve shirts, loose-fitting sack suits, skinny or bootlace ties: rockabilly, in other words.

One thing he wouldn’t wear, no matter how fashionable they became: jeans. Presley always associated working clothes with the sharecropping poverty of his youth. He’d only wear them if, say, a film role the likes of Jailhouse Rock demanded it. Or if money did. Ironically, Elvis lent his name to Levi’s for their ‘Elvis Presley’ style, the first black denim jeans. 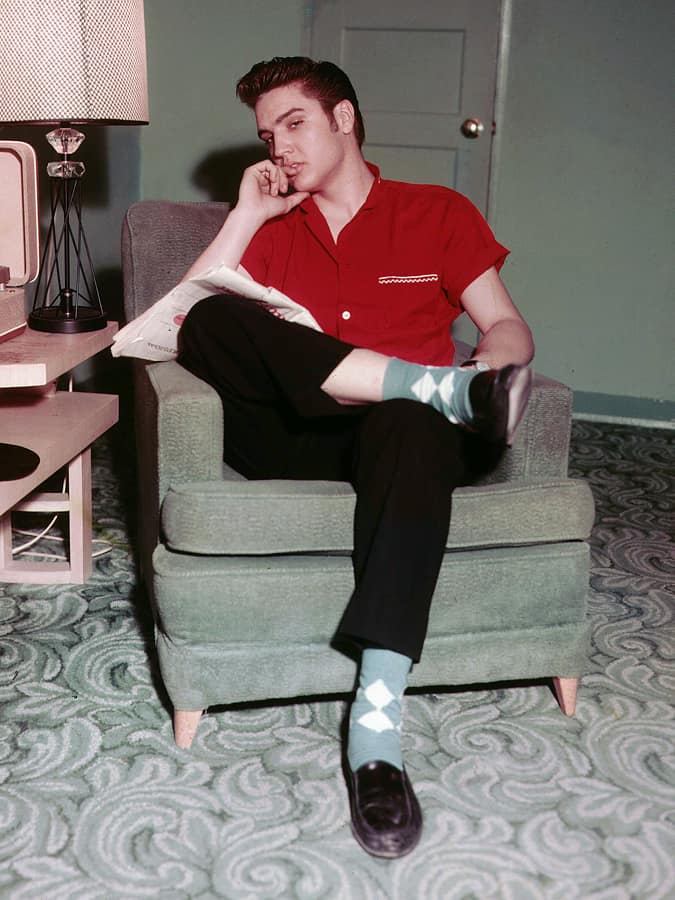 “He was very much a product of his time,” argues Dennis Nothdruft, curator at London’s Fashion & Textiles Museum, “albeit a very fashionable version. What made him stand out was less his clothes as him – because he was extremely attractive and he had this louche quality about him, which shows in how he wore the clothes. They seemed to be less fitted as draped on him, which reflected the way he moved. I think it’s fair to say he wouldn’t be a first choice for purely sartorial reasons but he did have a certain something about him and, of course, he did look incredibly cool in that black leather for his comeback.” Performing on the NBC special in 1968, wearing the famous all-leather outfit

Indeed, even at its most preposterous off-stage, Elvis managed to pull it off. When he met with a strait-laced Richard Nixon in the White House in 1972, Presley wore a gold-buttoned pea coat style jacket draped over his shoulders, a shirt with a collar bigger than the lapels on Nixon’s jacket, and a belt with a buckle the size of his head. Well, what else would a King wear to meet a President? “You dress kinda strange,” Nixon is said to have commented. “Well, Mr. President,” Elvis is said to have replied, “you got your show, and I got mine”.

Even when wearing what might seem merely his contemporaneous clothing choices, there was plenty of attention to detail. When he started making money Presley had his shirts made bespoke – he had elastic added at the cuffs and the elbows to give the sleeves a more billowing look. He was, unlike more pedestrian men of his era, comfortable wearing colour: for shirts and socks his favourite was bubblegum pink, then considered a distinctly feminine shade.

He’d happily clash patterns. He’d get his grandmother to embroider his shirts with some distinctive detail. His jewellery, of course, became increasingly excessive, but started with subtleties the likes of his ‘TCB’ (‘taking care of business’) signet ring – a deft bit of personal, and later profitable, branding. 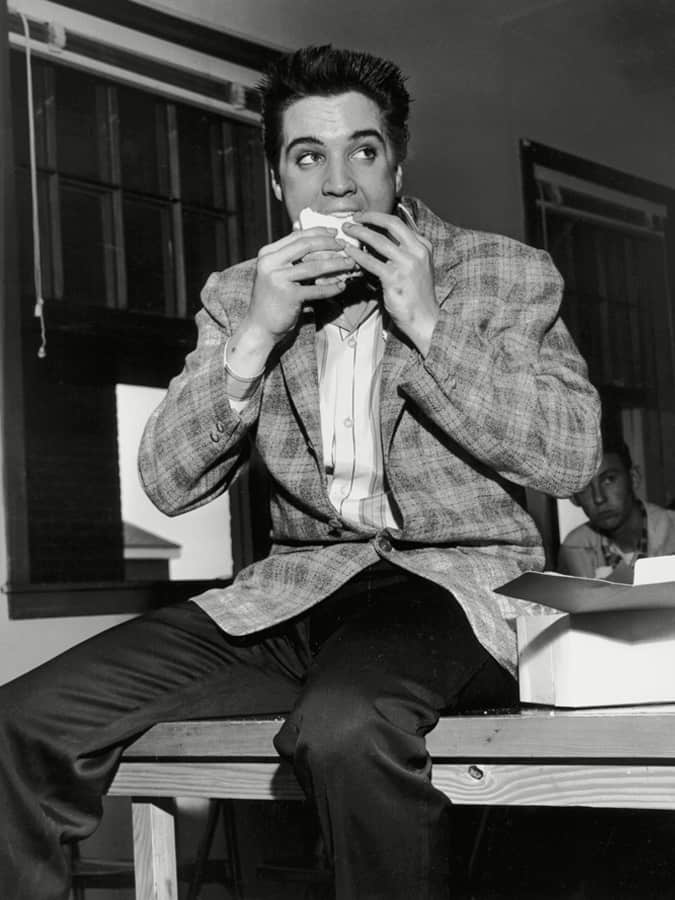 Elvis eating an army-supplied packed lunch on the day he reported for duty, 1958

And then, crowning it all, of course, was that hair, a long, unfashionable pompadour – inspired by Presley’s time working as a truck driver, that being the signature ‘do for the kings of the road through the early 1950s – and most definitely counter to the favoured crewcuts of the period. Presley knew just how important what one disapproving child psychiatrist called that “badge of emptiness” was to his style, his rebel image and to his sex appeal. His hair was regularly dyed to ensure Presley’s naturally sandy blonde colour achieved that jet black shade – men dyeing their hair was unheard of at the time – and required three different kinds of hair wax, at the same time, to achieve the desired look. He’d have a jojoba oil and vitamin E scalp massage daily.

That Elvis was aware of his image was certain. What he was less aware of was the impact it would have on menswear at large. While his performance attire was never likely to be emulated, the sheer magnitude of Presley’s fame – enhanced by his starring in 31 movies over just 13 years, genuinely redefining celebrity in the process – meant that his more personal wardrobe inevitably would be.

The Prison Workout: What It Is And Why You Should Do It

“I think most people would think of, say, Paul Newman or James Dean as stylish men from roughly that era before they’d think of Elvis,” as John Harrison, the creative director of Gieves & Hawkes has it. “But it’s different if, say, you work in the fashion industry. Then Elvis embodies that whole ’50s look. He’s definitely a style icon.”

In King Creole (1959) Elvis wore the most workmanlike outfit of his career – even against the stylist prison uniform of Jailhouse Rock. A chambray shirt over a white T-shirt, flat-fronted, wide-legged trousers and a moleskin, twin pocketed blouson. Elvis returned to similar jacket styles throughout the ’50s and beyond, and it’s easy to see why. Today this look is easily replicated and has recently been plugged by the likes of Prada x Mr Porter, Oliver Spencer and Burberry. For one of his earlier performances, around 1956, Elvis dressed in a way that simultaneously mirrored convention and defied it: he wore black trousers and loafers, with a white shirt under a loose fitting, contrasting tailored jacket. It was smart but sassy too, even disruptive. “I can’t over-emphasise how shocking he looked and seemed to me that night,” one Roy Orbison would later recall. Apparently the first thing Elvis did was to spit some gum onto the stage. Disapproving mothers no doubt fainted on the spot. One of the key attractions of Elvis’ early style was the ease of it. Yes, the way he wore his clothes added to his nonchalance, but the garments themselves were simple and easy to wear. Today, in a confusing world of fluorescent streetwear and flossing, this is an enticing way of dressing. Take this look as a case in point – it’s made up of straight leg trousers, an open neck polo shirt, a bomber jacket and white sneakers. It’s not going to change the world, but it’s an effortless combo that anyone can recreate. And no, he’s not flossing. How To Get Zac Efron’s Best Hairstyles

The Best Glute Workouts To Seriously Improve Your Fitness

Super Supper: How to host a successful dinner party