Is there anyone in Hollywood who has had the turnaround of Jonah Hill? Like that nerdy kid at school who you see ten years later only to find he’s a streetwear-draped millionaire clad in the world’s hottest brands and a best friend of Leonardo DiCaprio (don’t forget the two Oscar nods as well). This is the guy who played the archetypal high-school loser in breakthrough comedy Superbad. The transformation is a big one. There’s even a whole section on social media titled ‘Jonah Hill fit watch 2k18’.

And let’s talk about fashion because, well, Steve Jobs was super successful but sorry Steve, dad jeans and a baggy turtleneck do not make you a snappy dresser. Hill’s fashion style largely stems from his love of skate culture and in fact, his directorial debut Mid90s is set in the 1990s LA skate scene.

Skater brands have, of course, been at the top of the streetwear pile since the turn of the decade, with Supreme and Palace leading the pack. It’s a new world order in menswear, making Hill a new kind of style icon. He even featured in two snigger-inducing parody commercials for Palace.

What does Hill rep apart from logo tees then? Well, it mostly comes back to that 1990s skate style, rampant in fashion at the moment and a probable explanation for Hill’s own rise as an unlikely style icon. Trousers and jeans are wide legged which better suits the bulkier frame of the actor (although massive kudos to his recent weight loss).

That’s not to say Hill’s look is all unruly teen. Red carpet looks see the actor modernize his tailoring choices with a pair of sneakers or an air tie while Hill is also partial to a Cuban collar shirt when it comes to smart-casual looks – another zeitgeist piece in the fashion world at the moment.

Trying Out For Varsity

The high school jock look has worked for everyone from Zac Efron to Donald Glover, and it’s always got to be topped off by a letterman jacket. Hill’s version is a little less dewy-eyed and clean cut with the shades and beanie combo giving the look some street edge as the slim denim and squeaky clean Reebok Classics keep it smart and tight down below. For a British brand set up in 2009, Palace sure knows how to tap into that kitsch 1990s US skater aesthetic. This is a relatively demure T-shirt from the brand, but the logo still provides a much-needed draw for the eye in what is a fairly neutral outfit, with a relaxed fit on the tee and a straight leg through the trousers. Part Of The Prada Posse

With great lapels comes great responsibility, and so Hill rightfully takes care. It’s a fancy lightweight jacket and while the same could be said of Hill’s flowery shirt underneath, the different shades of blue pair well with the jacket’s neutral blue. From there go crazy down below and it would all be far too zany, but instead, the classic cut of the trousers serves to bring everything to a peaceful conclusion. Don’t Speak To Me

There’s something of the multi-billionaire music producer impresario in Hill’s look here. Those polarised shades so no one can see the inner workings of your mind through your pupils, light rain jacket because ‘someone’ has to be the voice of reason in the music studio. We’d get the jeans taken up a bit personally – there are too many rolls at the bottom – but the light wash denim contrasts nicely with the dark polo and those Saint Laurent luxury sneakers could go with anything. Granted, the black suit might seem a bit snoring boring now compared to the rise of garish streetwear, but its versatility means it will probably live far longer in your wardrobe. Keep it a classic, slim and two buttoned affair like Jonah to maximize usage, and pair it with sneakers and a tieless shirt for that contemporary edge without having to queue round the block for the next Palace drop. Chucking On The Overcoat

The camel woolen overcoat has a way of smartening even the most casual of outfits, and while Hill is hardly slumming it in a pair of joggers here, he doesn’t have to worry too much about what is going on underneath. However, when nabbing one for yourself, go single-breasted like Jonah. If you go double-breasted, the more traditional style might jar too much with anything that strays into the casual territory. Giving his ol’ pal Leo a run for his suave and sophisticated money, this is peak red carpet from Jonah Hill. While we could harp on about how exquisitely fitted the dinner jacket is, how the brogues offer a subtle but well-placed point of difference or the perfect composition of the bow tie – the real star here is Hill’s grooming. It just goes to show how a well-trimmed beard and a sharp do put the icing on top of the well-put-together cake. Normcore Is The New Norm

You’re not normcore unless you live normcore and judging by the amount of iced coffee Hill gets through (seriously mate, put the cup down) the guy is certainly just living your regular metropolitan bro life (with incredible acting talent, obvs). And so, on comes a normal classic green and beige pairing, normal neat chinos that won’t get you busted at work and some normal, comfortable sneakers – it’s not showy, but there’s not a style step out of place here. We’re somewhat saddened by the number of times Hill is papped in the streets, but despite seemingly getting hounded, at least his hit rate is solid when he’s caught. The red chinos run the show here, not too bright and spiffy, the rich shade pairs nicely with Hill’s navy jacket while the cigarette straight shape keeps their structure thanks to a tidy crop on the hem. Think of tie-dye and you think of wacky baccy-taking drum circles mumbling ‘kum ba yah’ but it’s also been a mainstay of skater culture and the contrasting vivid patterns make it a useful statement ally in more adventurous wardrobes. It’s also a bit on the down low trend barometer at the moment, but don’t try and pair it with anything that isn’t a neutral hue. Even Hill’s light wash denim jeans here might be a touch too bright.

The 5 Hottest Male Body Parts – According To Women Suede – we may go as far as saying it’s our favorite fabric. For when you lather it in protector spray (getting a stain off suede is a royal pain) its timeless luxury will last as long as you have breath in your lungs, or at least until the mid-life pounds start to arrive. Hill has the right idea, making his suede jacket the main focal point in his look with a neutral black underneath. Here’s Hill again putting the power of a good overcoat to good use, although this time the acid wash jeans and hiking boots lend him a punk air as opposed to someone just trying to dress down incognito. Then the look is just an air tie and dad cap away from the Hoxton hipster vibe Hill nails with aplomb. It’s the menswear staple that keeps on hitting home runs – the New York Yankees cap is a genuinely iconic piece worn religiously by hip-hop royalty right down to the Instagram crowd. The neutral navy tone makes it low-key enough to wear with a host of outfits but it still works best topping off a look that is streetwear-inspired, like Hill’s clean and monochrome ‘fit here. Summer sees the menswear rear guard dust down their 1950s styled camp collar shirts and while the trend, for the most part, has stayed towards its traditional origins it wouldn’t be unreasonable to expect more experimentation with the style as it progresses. Hill’s spiderweb version is pretty out there, albeit somewhat tamed by the sensible shoes and light wash denim. I mean, imagine if he wore it with side stripe trousers instead. Shudder. 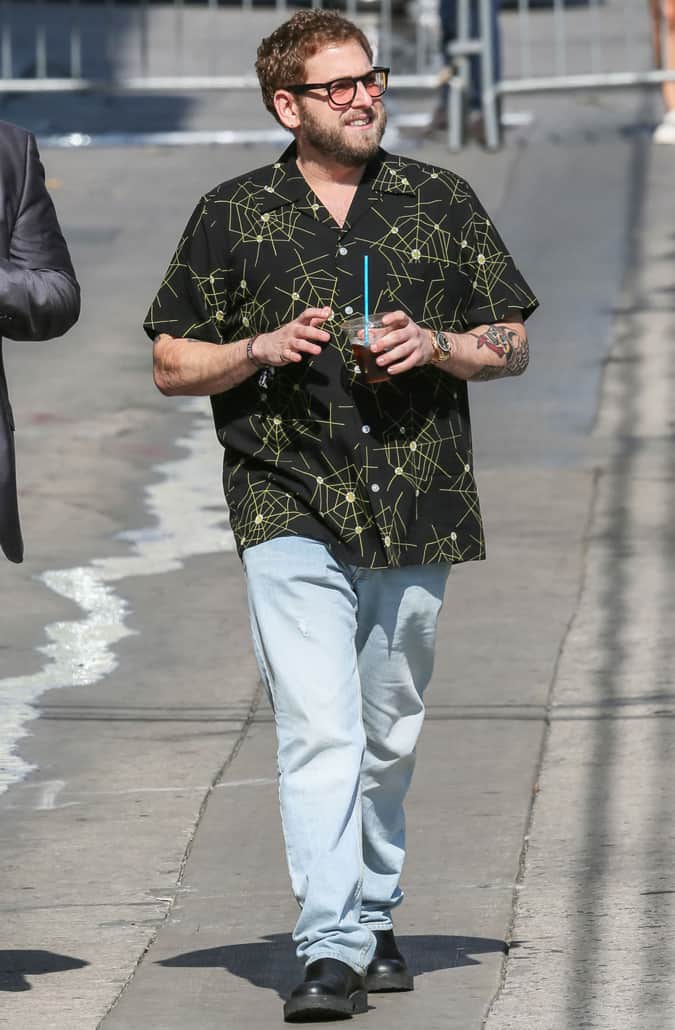 Crazy For The Camp Collar

This is perhaps more like it from Hill, a camp collar shirt that your mum would let you wear round for Sunday lunch. We would say that the sleeves are a little long, a cut north of the elbow is much more flattering, but the green makes a nice bold statement without having to crack out the tye-dye again as the dark jeans soften the look underneath. 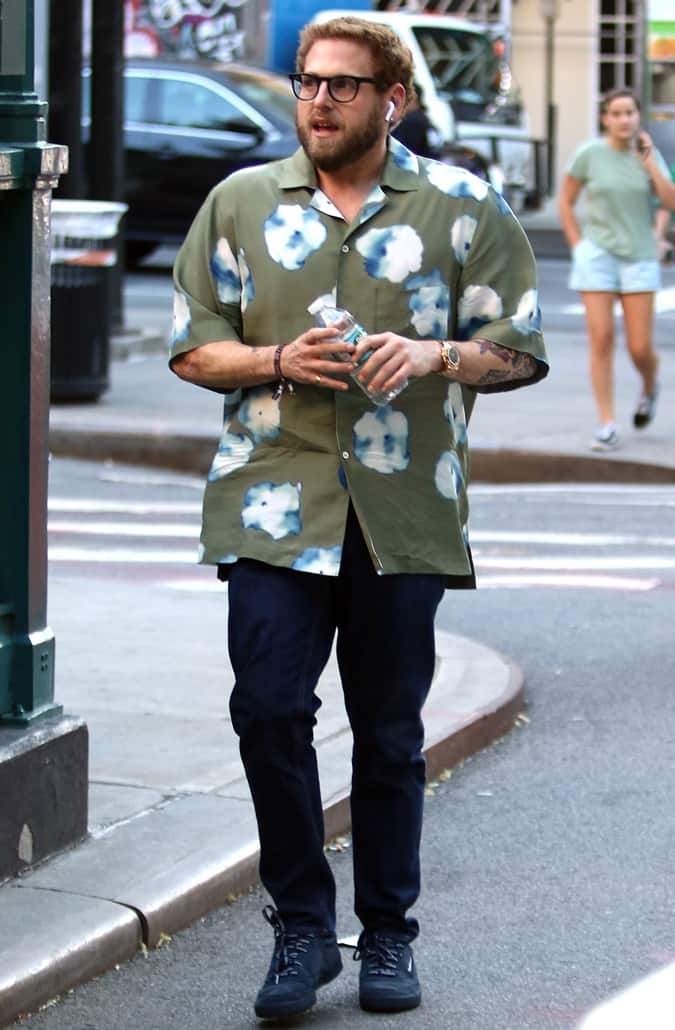 10 Apps That Will Boost Your Sex Life

The Hardest Bodyweight Workout You’ll Ever Do