An unlikely bit-player in one of the summer’s cinematic dramas has been the humble moustache. Or, to be more precise, the face-furniture attached to actor Henry Cavil. This became an issue because extensive reshoots for Justice League overlapped with the filming of Mission: Impossible – Fallout, for which Cavill had been required to grow a moustache (which he was then contractually prohibited from shaving). The realities of stunt-work meant that Cavill couldn’t wear a falsie for M:I, so Warner Bros took the hit and removed the offending ‘stache from his reshoot scenes using CGI (the results of which have not entirely impressed fans).

But if we’re going to reclaim the muzzy from 1980s footballers, Latin American dictators, and retired Northern Irish paramilitaries, which moustache style should you be going for? In descending order, these are the moustache styles you should try this year.

The closest to a naturally grown-out shape, the chevron moustache style is a deceptively tricky style to pull off unless your name is Tom Selleck or Ron Swanson/Nick Offerman. (We simply love Ron Swanson’s moustache; it’s truly flawless.) It can balance out big facial features and conveys a certain old-school, ‘eighties dad’, anti-fashion power, but you need a decent thickness of hair and growth on your upper lip to avoid looking like a schoolboy who’s trying to buy a pint.

It works best as part of a generally macho look, so try and put some gym-bulk on before growing this, and perhaps pair it with a heavy, unreconstructed scent for maximum alpha-male impact. The least showy, but the most easily executed of these styles, the beardstache is a classic workman-like moustache paired with a lightly developing beard. A look that suggests you did have a well kept Chevron, but a week or so of fighting crime, defending your property and generally being rugged has let it slip a little. Less eye-catching than a clean-shaven face as there’s a reduced contrast in the skin-and-hair tones, but you do need a decently even stubble growth to make this work.
This moustache style suits dark colouring better as lighter hair can make you look a just scruffy rather than ‘relaxed.’ This is Henry Cavill’s moustache in Mission: Impossible, so expect to see it appearing on your high street imminently (albeit on men who don’t look quite as heroic as Cavill). 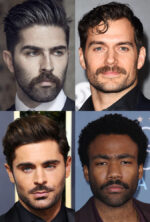 The pencil moustache style was originally conceived as an elegant, minimalist reaction to the overbearing facial hair of the Victorians. Popularized by Hollywood idols, it only later became shorthand for the more furtive gentleman – and to this day, it does conjure up images of chaps conning lonely widows out of their savings or selling hooky nylons to London’s women during World War II.

Everything You Need to Know About Facial Sculpting for Men

This isn’t to say it can’t be revived in a modern facial hair context, though (take a bow, Jamie Foxx), but be warned that it will require almost daily shaving to maintain its clean lines, so you might need to take out your handy moustache and beard trimmers.

If you’ve got small features, this moustache style can work well. However, if paired with a scruffier look or long hair, there’s a real risk of getting into ‘amateur sorcerer’ territory (Jack White is a prime offender). An extremely strong personal statement. Associated with Hulk Hogan, Samuel L. Jackson in Pulp Fiction, 80s leather ‘clones’ like the guy from the Village People, and amphetamine-addled bass-wielding metal god Lemmy from Motorhead, this is an absolutely no-half-measures moustache style.

Not advised for anyone with a long narrow face as it will give you a certain equine aspect, and it needs to be considered as part of a complete outfit: it will go perfectly with head-to-toe biker leathers or broken-in double denim. Not such a good fit with something you picked up in TJ Maxx to wear to the football. A tricky case to call: on its own merits, a fine moustache style that demonstrates a real commitment to growth, grooming and upkeep. But it has unquestionably suffered from association with retro-bores who have tainted it with the whiff of ‘Keep Calm And Carry On’ posters, ear-bleeding, irony-laden electro-swing music and Blitz-revival club nights.

It’s adaptable to most face shapes, so if you are going to try out the Handlebar moustache, either contrast it with a simple workwear-inspired outfit, or go for something smart, preppy and Ivy League (or, like its most famous exponent, Rollie Fingers, a baseball kit).

In short, if your moustache is shouting for attention, then your outfit shouldn’t be. The absolute big daddy of face fuzz, best exemplified by actor Sam Elliott. A shaggy, grown out, big-beast moustache style, perfect for the larger gentleman, anyone with a huge nose or a wide face. It can make you look prematurely old, so think carefully about committing to this moustache style.

Be prepared for some gentle ribbing from your less fashion-forward peers, along the lines of ‘Careful you don’t get harpooned, you big fat bastard.’ Also, check that your significant other isn’t going to dump you rather than be seen with someone who looks like they spend a lot of their free time playing Magic: The Gathering and watching The Discovery Channel. Perhaps the worst facial hair style ever devised and one that even the patron saint of male grooming, David Beckham, has fallen victim to a combination of a pointed beard that traces the jawline and peaks in a sort of below-lip soul-patch, sitting below a disembodied moustache.

A statement that hints at long hours arguing on Youtube comment threads about Pick-Up Artistry, in-depth re-watchings of The Matrix, and ownership of at least one sword (or ‘mastery of the blade’ as this kind of helmet would doubtless term it). 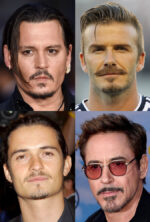 Made famous by Frank Zappa, this bold statement look is the close cousin to a horseshoe moustache, except that it is a little shorter and has the addition of a soul patch. Johnny Depp has been known to rock a slightly less bushy version. The Zappa usually accompanies a mullet, sleek shades, and hankering for baby-back ribs. Also, men with a Zappa moustache are usually master grillmasters – we don’t make the rules.

If you hope to keep this look going, make sure you have moustache and beard trimmers that are ready to go.

We all know the famous 20th-century Surrealist painter Salvador Dali, but did you know that he also has a famous (or infamous, depending on how you see it) moustache named after him? The Dalí is a pencil moustache with long handles that are waxed thin to form sharp points and styled straight towards the outer edges of the eyes, resembling the horns of a Texas Longhorn. Dalí was known for his eccentric styling, going as far as creating an infinity symbol with his hair follicles.

If you wish to pull this look off, you’re going to need moustache wax – and lots of it.

Okay, now this is the worst moustache style – and it’s all thanks to a particular, infamous human being from our history books. The toothbrush is a stubby moustache shaved on both sides to be the approximate width of the nose. If you’re looking to rock this look, our advice is just a big, fat no. Don’t do it.

Korean Skin Care: The 10-Step Routine Every Guy Should Know